Dear Mr. Wrong,
You wrote that your dream girl was a certain A-list movie star or at the very least someone who looked like her. I think that I could look like her, if I had a personal trainer, a chef, and a team of makeup artists and stylists, as well as a photographer to airbrush all flaws from my pictures. I have to say that you don't resemble any movie stars, though. Therefore, alas, it will never work between us.

Dear Mr. Wrong,
In your profile you wrote about one of your dates; you made fun of her because she didn't know where your home state was. I suppose it is important to study maps before going on dates, because you never know when geography will be a deal breaker.

Dear Mr. Wrong,
I guess I can understand why you wrote in your profile that you wouldn't date anyone who weighed more than 125 pounds. After all, it's not like you can tell from a woman's pictures whether she is thin or not. Oh, wait a minute...YES YOU CAN!

Dear Mr. Wrong,
I think it's nice that you described yourself as "entilligent" and that you like to "reed" in your spare time. Tell me, have you ever read a dictionary?

Dear Mr. Wrong,
I  noticed in the headline for your profile you wrote that you were "looking for a few good hotties". Does that mean that you aren't willing to settle for just one hottie? Although I don't expect exclusivity right away, I don't think I'd be willing to be one of many girlfriends, even though the girls in your photos look really happy to be sitting in your lap.

Dear Mr. Wrong,
I couldn't help noticing that you used the words "sex" and "virgin" more than once in your profile. I'm guessing that a relationship is not the number one thing that you're looking for?

One of the blogs I follow, Cruel Smooches, included some funny posts about the e-mails that the blogger was getting on match.com and her responses to those e-mails. It gave me the idea for this post and the e-mails that I write to potential matches.

On chemistry.com, there are three different ways to contact someone: send a "chemistry starter", which is something like a fill-in-the-blank game; send an e-mail; click on the "I'm interested" link. Almost all of the guys who have contacted me first have just clicked on the "I'm interested" link rather than send a note. I can understand how difficult it can be to send that first e-mail, because you're not quite sure what to say to introduce yourself in a way that will make yourself attractive to your potential match. However, it is slightly annoying that the guys can't or won't actually send a note rather than just click on "I'm interested", because then it's like they're transferring the task of sending the first e-mail to me.

When I contact a guy for the first time, I always write a note. I usually respond to certain things that the guy wrote in his profile, like what he likes to do in his free time or which neighborhood in Chicago that he lives in. I ask him questions and I say a little bit about myself.

Obviously, I don't write e-mails like the ones above to any of my potential matches. But sometimes, I wish that I could, just so they'll see that they should put more thought into writing their profiles. I've seen profiles where the pictures of the guys looked good, but what they wrote in their profiles was either a) insulting to women; b) creepy, in the "I think that being in a Freddy Krueger movie would be less frightening than going on a date with you" kind of way; c) uninformative, as in there was hardly anything written in their profiles and made me think that they were either too lazy or unimaginative to write anything or were only on the site for one thing (wink, wink). Because of those things, I decided not to contact them or respond to them.

Of course, not all the profiles on chemistry.com are less than appealing. The guys that I've contacted and responded to are the ones who wrote interesting things in their profiles. Although writing an online dating profile obviously isn't the same thing as writing a short story or a novel, I think it is important to keep your audience in mind. If your profile is full of cliches, misspelled words, or offensive statements, you're going to turn your audience off and make them stop reading.

Recently, I've gotten some e-mails from a few guys who seem okay, although one guy wanted me to give him my contact information right away because he had only signed up for the "free communication weekend" and apparently he didn't want to pay for a regular membership. Gee. Stuff like that makes me feel as if I've finally found "the one". 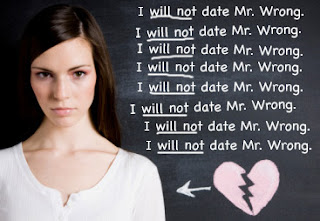 If you were to write an "introductory" e-mail to someone on an online dating site, what kinds of things would you write?
Posted by Neurotic Workaholic