Liebster Award and Trivia about Me

1. I would never write that I like to take long walks on the beach in my online dating profile, because there's nothing romantic about the possibility of getting stung by a jellyfish or getting attacked by a shark.

2. I could never get plastic surgery, because even though some people get it and still look natural, I'm afraid that I'll end up looking like Joan Rivers.

3. If there were no cute guys with big muscles at my gym, I'd suddenly feel a lot less motivated to exercise.

5. I'd be willing to eat more vegetables if they could be covered with chocolate and still taste good.

6. I don't know how to put on makeup without looking like I put it on during a blackout.

7. I don't understand why Law and Order and 30 Rock got cancelled but Storage Wars and American Hoggers keep getting renewed.

(Side note: I was supposed to come up with eleven facts about myself, but my eyes are tired from watching a bunch of Youtube videos of standup comedians and bloopers from The Office. Another fact about me: I procrastinate too much.) 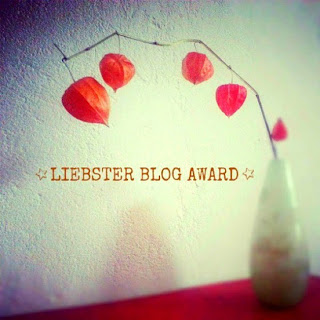 She also said that people who receive this award have to write down eleven facts about themselves and then answer her questions. Here are her questions and my responses:
1. Les Mis or Sweeney Todd? Neither. I like Grease, because there aren't any cannibals or rebels in it.

2.  If you were a comic book superhero, what would your name be? Super Neurotic Workaholic

3. What are the toppings on your dream hamburger? Onions. After I eat the burger, I'd go and breathe on all the annoying people.

4. What city do you most want to visit? New York

5. Favorite city that you have visited: Barcelona

6. Which Disney character is most like you? None, but the Sesame Street characters that are most like me are Cookie Monster and Oscar the Grouch, because I love cookies and I'd be a lot less grouchy if my loud neighbors would move away.

7. Would you rather write a book that's a best-seller or a book that's highly acclaimed? I should say I'd prefer one that the critics like, but I also want a lot of money so that I can buy a lot of cookies.

8. What's your biggest pet peeve when it comes to grammatical mistakes in a published book? Spelling errors.

9. If you could live permanently in any decade, what would it be? This decade, except I'd pass a law that makes it illegal for people to use their cell phones excessively, so that the cell phones would somehow throw water ballons at them every time they start talking on their phones during movies or texting during class.

10. Who's your favorite fictional romantic couple? Why is it that I immediately thought of Oedipus, who married Jocasta, not knowing that she was actually his mother? Freud would probably have a field day with that one.

Now I'm supposed to pass the award to other bloggers and have them list eleven facts about themselves and answer questions. If I nominate you and you don't respond, no biggie. It's not like I'll morph into Oscar the Grouch or breathe onions on you. And you can still have the award even if you don't answer the questions, but you can't tag me back.

Here are the bloggers I'm passing the award to (I didn't pick eleven partly because I realized that at least half the bloggers I follow no longer blog.)
1. Livia at Leave it to Livia
2. Peggy Eddleman at Will Write for Cookies
3. Misha Gericke at Taking Charge of My Life
4. New York Cliche
5. Deniz Bevan at The Girdle of Melian
6. Emily R. King
7. Annalisa Crawford at Wake up, eat, write, sleep

I know I was supposed to come up with more questions, but those were all I could come up with. Also, I want to watch Dwight Schrute freak out on Youtube a few more times.

Even if I didn't tag you, I'm interested in hearing your responses to any of my or Nicki's questions. For example, who's your favorite fictional romantic couple? If you could meet the characters of any book, which book would it be?