I've been having difficulty lately finding a good place to write. Even though I usually prefer peace and quiet when I work (blame it on the fact that I grew up in a small town, which was always quiet, except when people were playing sports or gossiping about each other), I don't mind the noisy atmosphere of cafes. (You'd think that after living in Chicago for several years I'd be more tolerant of noise by now. You'd think, right?)

What does bother me, however are the Wi-Fi freeloaders. I mentioned them in my last post; they're the people who camp out for hours with their laptops and don't buy anything (they're even more annoying than the people with laptops who nurse one cup of coffee for hours). Even though they can get free Wi-Fi at the public library (where they're obviously not expected to buy anything), they think it makes more sense to take up extra tables and prevent paying customers at cafes from sitting down.

Freeloader #1: Did you see that guy's hair? I'm totally going to tweet about him.
Freeloader #2: Too late. I already did.
Freeloader #1: What? I can't believe you did that! I wanted to tweet about it!
Freeloader #2: You're just jealous because I have more followers than you.
What I wish I could have said: Tweet this, freeloaders! (I also wish I could have raised my coffee cup high over my head, so that they'd throw themselves over their laptops, sobbing, "NO! Not our laptops! Take us instead!")

I've tried writing in the library at school, because theoretically it's a quiet place to work. I say "theoretically" because several of the undergrads go there to do anything but study. It's often noisier in there than it is at Wrigley Field on game day, or the bars in Wrigleyville after the game is over.

Undergrad #1: I can't believe the professor assigned us all this homework! I have no time to work on this.
Me: Maybe if you had done something other than sit there and complain for the past two hours, you'd have had time to get it done.
Undergrad #2: Haha, check out what somebody carved on the desk! I didn't even know that was a swear word!
Undergrad #3: Oh, I just got another text message from that girl I told you about.
Me: I know. So does everyone else in this library. If you're going to keep texting, do you think you could at least silence your phone before I silence it for you?
Undergrad #1: Have you seen my study partner? JANE? WHERE ARE YOU? I'M NOT DOING THIS PROJECT ALL BY MYSELF!
Me: Do not start throwing things. Do not start throwing things.

I've also tried writing on the buses and trains, because I spend a lot of time commuting every day. But because it's tourist season I'm often stuck standing. When I do get a seat, I've found that people often sneak peeks at what I'm writing.

Creepy Guy sitting next to me: What are you writing?
Me: Um, I'm just writing in my journal.
Creepy Guy: Can I read it?
Me: No.
Creepy Guy: Since you're writing stuff down anyway, can you at least write down your phone number for me?
Me: No. I have to go far away now.

I've also tried writing in my apartment, but it always feels like it's eighty or ninety degrees in there, even in the winter.

Me: It is so hot in here! I feel like I'm melting! I'm meeellltttinngg!
Guy passing by outside: Sounds like the Wicked Witch of the Midwest is freaking out again.

Since it gets so hot in my apartment, I have to turn on my fan and open my windows. However, due to faulty screens, bugs keep crawling into my apartment.

Me: Oh, dear God, exactly how many legs does that thing have? Get away, Demon Bug, GET AWAY!

So I'm still trying to find a place to write. But I did read this interesting post recently by a former publishing intern; her post made me think that if she can write her novel in a van, I should be able to get my writing done anywhere. That's if I can restrain myself from hurling coffee or library books at loud people.

Here are some pictures of writing spaces that I thought looked cool: 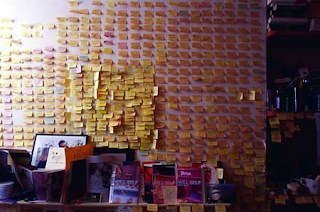 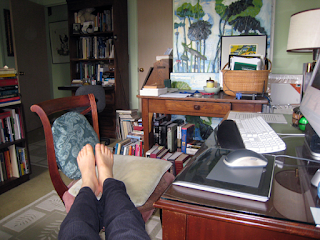 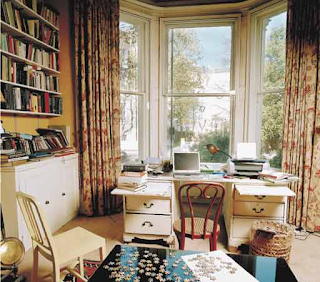 What about you? Where do you like to write? Which places do you think are most/least conducive to writing?
Posted by Neurotic Workaholic