Music to (Not) Write to

I listen to the type of music that most people cringe at and mock me for. To give you an example, at least six of the Top 25 Most Played Songs on my iPod are by Britney Spears. I've liked her music ever since she first became popular more than ten years ago. Even when she went through her weird phase and people devoted entire television shows and magazines to bashing her, I remained one of her loyal fans and enjoyed her music anyway.

I like music that's fun, upbeat, and good to dance to. (I try not to dance when I'm walking around outside, though, because that might look weird. And I might accidentally knock someone into the street if I were to start flailing my arms around.) So what if some of the pop musicians I like aren't nominated for Grammys or get stellar reviews from Rolling Stone? As long as I like the music I'm listening to, that's what matters to me.

Years ago, when the boy bands were popular, I was totally obsessed with them, and I took a lot of ribbing for that too (which, actually, kind of hurt my feelings). One of my biggest regrets is that I never got to see N'Sync perform live in concert, though I did go to a Backstreet Boys concert once with a friend. Many of the fans were younger than us. My friend and I sat near this 12-year old girl and her mom; the mom kept covering her daughter's eyes every time one of the guys took off his shirt. As a result, the girl didn't see about a third of the concert. I enjoyed the music and the dancing, but I didn't get why people had to scream THE ENTIRE TIME. How could they hear the guys sing if they were screaming at them through the whole song? It's not like Nick Carter was going to look at any individual fan and say, "Ah, yes, you who screamed loudest for me, you must come away with me."

I finally started to outgrow the boy bands and the other male teen idols when I heard a story about a fan who paid over a thousand dollars for a piece of toast that a member of N'Sync had bitten into. And I thought, Wow. Now THAT'S obsessive. I mean, I get that she's devoted, and at least she got free tickets as well, but if I had a thousand dollars, I'd rather spend it on a trip to somewhere cool. Or maybe I'd just buy candy.

But even though I've stopped listening to the boy bands and expanded my musical tastes to stuff other than pop music, I still like listening to the likes of Britney and Taylor Swift. I've found, though, that it gets to be too distracting to listen to them when I'm writing. I'll be working on one of my stories and listening to "Piece of Me", and then I'll start thinking about how people started liking Britney again once she divorced Kevin Federline. Or I'll listen to Taylor's "You Belong with Me" and feel the urge to watch the music video on Youtube, and then I'll start watching her other videos. And then I feel hypocritical for getting mad at a few of my former students for being able to name all the American Idol finalists but not all the main characters in the some of the stories we studied.

Do any of you listen to music while you write? (Or do you think it's better to leave the music off while you write?) If you do, I'm open to any good recommendations. And by good, I mean the kind that involves synchronized dancing in music videos. Just kidding. Well, not really. 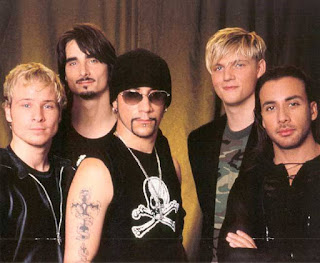 Seriously, how could anyone think these guys weren't cute? I mean, talented?
Posted by Neurotic Workaholic